The research, involving paleontologists from the University of Pisa and of the New York Institute of Technology, also clarified the origin of the killer whale, another extant macropredator

When did whales start feeding on other marine mammals? Probably in very recent times, at least so it seems from the discovery in Greece of an extraordinary fossil dolphin, similar and related to the extant false killer whale (Pseudorca crassidens). Indeed, this fossil was found with fish remains of its last meal. The confirmation comes from the study of another fossil discovered in Tuscany over a century ago, a close relative of the extant killer whale (Orcinus orca).

A new study made by paleontologists from the University of Pisa and the New York Institute of Technology rewrites the evolutionary history of these macropredators of the seas. The results of this research have been published in the prestigious international journal Current Biology (https: // doi. org / 10.1016 / j.cub.2022.02.041). The research was carried out on two separate fronts from over a century of history: a new extraordinary fossil recently discovered in Rhodes (Greece), and the only ancestor of the modern killer whale, discovered in Cetona (Tuscany, Italy) in the second half of the 19th century. 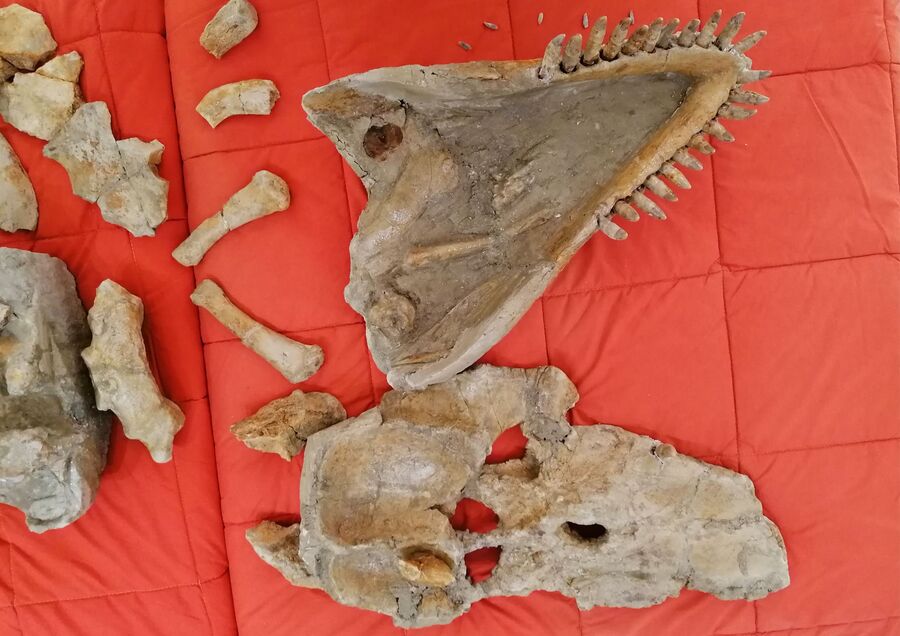 The Rhodes fossil consists of a skeleton discovered in 2020 by Polychronis Stamatiadis, an expert in geology and paleontology, from 1.5-1.3 million years-old clays exposed in the bay of Pefkos on the southeastern coast of the island. The fossil represents one of the most complete Pleistocene cetacean skeletons ever found until now.

"As soon as I received the photos of this fossil from Polychronis - says Giovanni Bianucci, paleontologist of the Department of Earth Sciences of the University of Pisa and first author of the publication - I immediately realized the importance of this discovery, later confirmed by my visit to Rhodes where, thanks to the hospitality of Polychronis, I studied the skeleton in detail. During the study I realized that this fossil was a new dolphin to science, being a cetacean like Pseudorca but with some characters of a Globicephala (pilot whale). So, we called this new dolphin Rododelphis stamatiadisi dedicating it to the Greek island where it was found and to its discoverer. "

But Giovanni and his colleagues also wanted to understand what and how this new dolphin fed: was it a ferocious predator that also captured other cetaceans like the extant killer and the false killer whales? Or did it feed more quietly in deep water on squids by suction like the pilot whale? The study of the skull and teeth only partially clarify these doubts about the feeding strategy of Rododelphis. If it is true, in fact, that the Rhodes dolphin has some macropredatory affinities with the false killer whale, such as the presence of 11 robust teeth implanted on the lower jaw and the large temporal fossa (the area of the cranium where the buccal muscles are inserted); on the other hand, the rounded shape of the mandibles, the anterior position of the last maxillary tooth and the limited wear of the teeth are all characters found in the pilot whale and other cetaceans using suction. 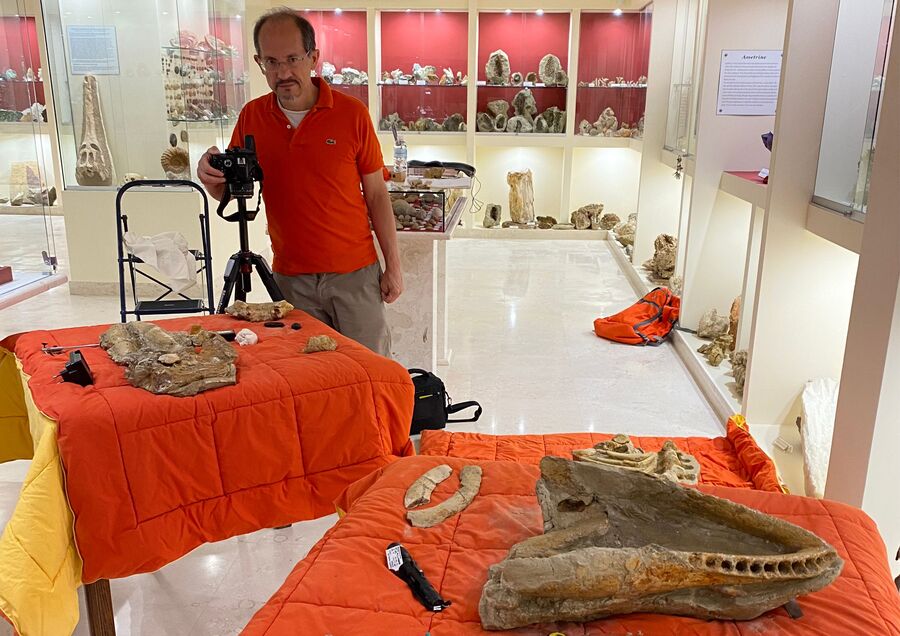 "The solution to this puzzle - says Alberto Collareta, also a paleontologist of the Department of Earth Sciences of the University of Pisa, who took part in the study - comes from the exceptional discovery of the fossil remains of the last meal of the Rhodes dolphin, found around the skeleton at the time of excavation and its preparation. These are otoliths, calcium carbonate concretions placed in the inner ear of vertebrates. Otoliths are often the only preserved part of the fossil fishes. Those found associated with Rododelphis belong to Micromesistius poutassou, commonly known as blue whiting, a fish that still lives in the Mediterranean between 300 and 400 meters deep. Examining these otoliths, it was also possible to estimate the length of the fish caught by the dolphin to be around 30 cm."

What information do we get from the discovery of these otoliths? That Rododelphis ate medium-sized fish and therefore, perhaps, was unable to catch other dolphins, as the false killer whale does; but also that, unlike the pilot whale, it did not feed on small cephalopods.

While Polychronis was discovering the skeleton of Rododelphis, Sara Citron had just finished her master's thesis in Conservation and Evolution at the University of Pisa on Orcinus citoniensis, the fossil orca discovered in Cetona (Siena) from 3–4 million year-old marine Pliocene sands. This exceptional skeleton was described for the first time in 1883 by the great naturalist Giovanni Capellini who gave its name to the Museum of Geology and Paleontology of the University of Bologna, where the fossil is still preserved and exhibited.

"With my thesis work - says Sara - I had the opportunity to study this fossil in detail and to obtain important clues about the diet of this ancestor of the biggest active predator among all current cetaceans. The Cetona orca looks like a reduced version of the current species Orcinus orca: the shape of its skeleton is very similar to the extant killer whale, but the length of the body should not exceed three meters, about half of the extant orca. With such a small size it is therefore unlikely that Orcinus citoniensis was able to capture large prey as Orcinus orca does. The skull features a longer, narrower rostrum and a smaller temporal fossa than Orcinus orca, further supporting the hypothesis that even the Cetona orca, like the Rhodes dolphin, was unable to catch prey as large as dolphins or baleen whales. "

The study of the wear and the apical microwear of the teeth of Orcinus citoniensis confirms the observations made on the shape of the skull and on the body size: these abrasions, caused by the activity of predation, are compatible with a fish-based diet, in analogy with as observed in some current populations of killer whales.
The study conducted by Sara suggests, therefore, that Orcinus citoniensis also fed on medium-sized fish.
It remained to understand the kinship relations between these two fossil species and the extant killer and false killer whales. To solve this mystery, it was necessary to reconstruct the phylogeny (a sort of genealogical tree) of the Delphinidae, the cetacean family including Rododelphis, Pseudorca, Orcinus citoniensis, and Orcinus orca.

"We took into consideration hundreds of morphological characters - explains Jonathan Geisler, an anatomist at the New York Institute of Technology and co-author on the study - to determine where living and fossil killer whales fall in the evolutionary tree of oceanic dolphins. We found that Rododelphis was a close relative of Pseudorca and Orcinus citoniensis was a relative of Orcinus orca. Thus, our study supports the hypothesis that the Rhodes dolphin and the Cetona orca represent two similar, but separate, evolutionary stages. In these stages, true and false killer whales preferentially preyed on medium-sized fish, rather than on seals, dolphins, and baleen whales. Thus feeding on marine mammals happened very recently, showing that the predation by these fossil killer whales was not a driving force in the evolution of gigantism in baleen whales". 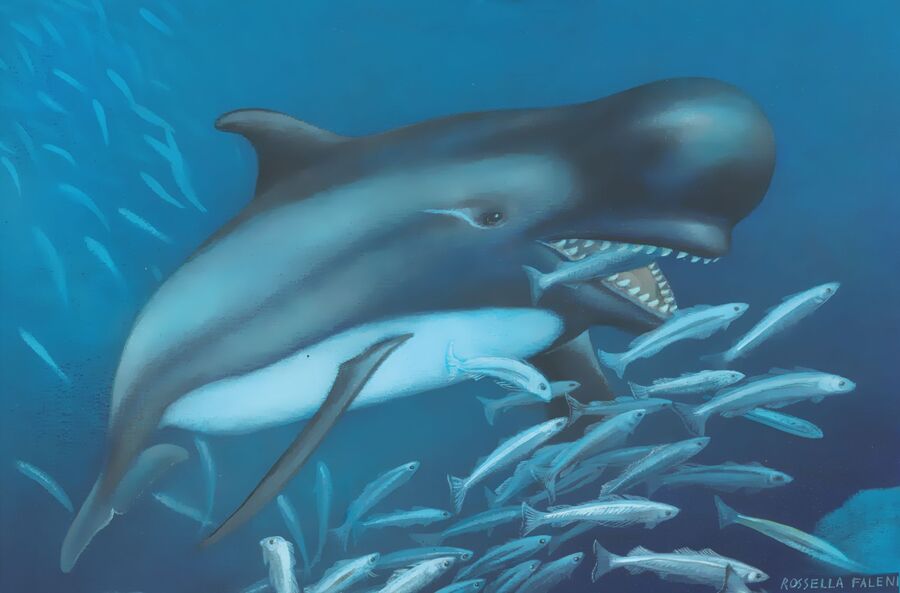 Artistic reconstruction of Rhododelphis made by the scientific illustrator Rossella Faleni

"This study - concludes Giovanni Bianucci - provides a small but important piece to fully understand the placement of modern delphinid and more generally cetacean fauna, still largely shrouded in mystery due to the extreme global scarcity of significant fossils of Pleistocene cetaceans. The discovery of Rododelphis encourages us to continue investigating areas such as Greece and southern Italy where Pleistocene marine sediments, potentially rich in fossil cetaceans, are abundantly exposed.